This Killdozer Patch is a 3″ in diameter and velcro backed . There is also a matching sticker available!

The bulldozer was a modified Komatsu D355A, that Heemeyer referred to as the “MK Tank” in audio recordings, fitted with makeshift armor plating covering the cabin, engine, and parts of the tracks. In places, this armor was over 1 foot (30 cm) thick, consisting of 5000-PSI Quikrete concrete mix sandwiched between sheets of tool steel (acquired from an automotive dealer in Denver), to make ad-hoc composite armor. This made the machine impervious to small arms fire and resistant to explosives. Three external explosions and more than 200 rounds of ammunition fired at the bulldozer had no effect on it.

For visibility, the bulldozer was fitted with several video cameras linked to two monitors mounted on the vehicle’s dashboard. The cameras were protected on the outside by 3-inch (76 mm) shields of bulletproof plastic. Compressed-air nozzles were fitted to blow dust away from the video cameras. Onboard fans and an air conditioner were used to keep Heemeyer cool while driving. He had made three gun-ports, fitted for a .50 caliber rifle, a .308 semi-automatic rifle, and a .22LR rifle, all fitted with a one-half-inch-thick (1.3 cm) steel plate. Heemeyer apparently had no intention of leaving the cabin once he entered it. Authorities initially speculated that he may have used a homemade crane – found in his garage – to lower the armor hull over the dozer and himself. “Once he tipped that lid shut, he knew he wasn’t getting out,” Daly said. Investigators searched the garage where they believed that Heemeyer built the vehicle and found cement and armor steel.

Heemeyer took about a year and a half to prepare; in his notes he wrote: “It is interesting to observe that I was never caught. This was a part-time project over a ​1 1⁄2 year time period.” Clearly he was surprised that several men, who had visited the shed late the previous year, had not noticed the modified bulldozer “especially with the 2000-pound [900kg] lift fully exposed … somehow their vision was clouded.”

Only Heemeyer died in the event (by a self-inflicted gunshot wound). However, the modified bulldozer came to be known as “Killdozer” after the name of a short story by Theodore Sturgeon. 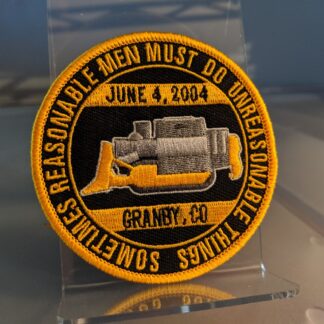