oi m8, This is a 3″ wide, embroidered, velcro backed knife license patch with an updated expiry date! You’ll need this to avoid running afoul of the bobbies.

Previous versions of the knife license patch glowed in the dark, but current versions do not.

“We the undersigned are professionals and community leaders from across the UK who call on Government to see the sale of pointed domestic kitchen knives as a thing of the past,” reads the not-a-parody open letter from the Diocese of Rochester, signed by church leaders, lawmakers, psychiatrists, academics, and the like. “Historically we needed a point on the end of our knife to pick up food because forks weren’t invented. Now we only need the point to open packets when we can’t be bothered to find the scissors.”

“Every knife sold in the UK should have a GPS tracker fitted in the handle,” insisted Scott Mann. “It’s time we had a national database like we do with guns.”

Meanwhile, the Thames Valley Police in the U.K. has advised they will no longer post photos of seized knives on social media “to help reduce the fear of knives and knife carrying in our local communities.”

A butter knife can be an offensive weapon, the High Court ruled.

The decision came in the rejection of an appeal by Charlie Brooker, of Welling, Kent, who had been convicted under the Criminal Justice Act of carrying a bladed instrument.

Mark Hardie, appearing for Brooker, argued that the knife had no handle, sharp edges or points and therefore could not fall foul of a law intended to protect people from dangerous weapons.

But Lord Justice Laws, sitting with Mr Justice David Steel, disagreed. He said: “I would accept that a sharp or pointed blade was the paradigm case – however the words of the statute are unqualified and refer to any article that has a blade.” 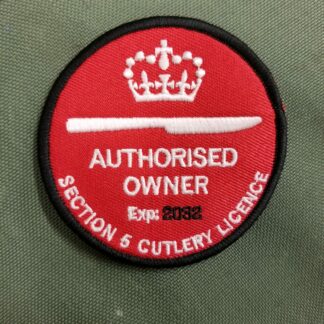