This is a 3″, velcro backed patch featuring a classic scorpi boi.

Although it was developed for use with security forces and special forces, the weapon was also accepted into service with the Czechoslovak Army, as a personal sidearm for lower-ranking army staff, vehicle drivers, armoured vehicle personnel and special forces. Currently the weapon is in use with the armed forces of several countries as a sidearm.

The Škorpion was developed in the late 1950s by Miroslav Rybář with the working name “model 59”. The design was completed in 1961 and named “Samopal Vz. 61”.[2] It was subsequently adopted by the Czechoslovak Army and security forces, and later exported to various countries. Yugoslavia produced a version under licence. It was also used by armed groups,[4] including the Irish Republican Army, Irish National Liberation Army and the Italian Red Brigades. The latter used the Škorpion during the 1978 kidnapping of Aldo Moro, also using this weapon to kill Moro.[2][5] In the 1990s the Gang de Roubaix used the Škorpion in a series of attacks in France.[2] In 2017 police in Sweden estimated that about 50 formerly deactivated weapons from Slovakia were in circulation among criminals in Sweden.

This is a 3″, velcro backed patch. 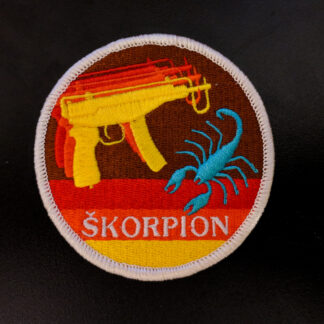