This is a 4″ tall, woven, velcro backed patch of a badger.

This is a 4″ tall, woven, velcro backed patch of a badger.

Badgers are short-legged omnivores mostly in the family Mustelidae (which also includes the otters, polecats, weasels, and ferrets), but also with two species called “badgers” in the related family Mephitidae (which also includes the skunks). Badgers are a polyphyletic grouping, and are not a natural taxonomic grouping: badgers are united by their squat bodies, adapted for fossorial activity. All belong to the caniform suborder of carnivoran mammals.

The eleven species of mustelid badgers are grouped in four subfamilies: Melinae (four species, including the European badger), Helictidinae (five species of ferret-badger), Mellivorinae (the honey badger or ratel), and Taxideinae (the American badger); the respective genera are Arctonyx, Meles, Melogale, Mellivora and Taxidea. Badgers include the most basal mustelids; the American badger is the most basal of all, followed successively by the ratel and the Melinae; the estimated split dates are about 17.8, 15.5 and 14.8 million years ago, respectively.[1] The two species of Asiatic stink badgers of the genus Mydaus were formerly included within Melinae (and thus Mustelidae), but more recent genetic evidence indicates these are actually members of the skunk family (Mephitidae).[2]

Badger mandibular condyles connect to long cavities in their skulls, which gives resistance to jaw dislocation and increases their bite grip strength.[3] This in turn limits jaw movement to hinging open and shut, or sliding from side to side, but it does not hamper the twisting movement possible for the jaws of most mammals.

Badgers have rather short, wide bodies, with short legs for digging. They have elongated, weasel-like heads with small ears. Their tails vary in length depending on species; the stink badger has a very short tail, while the ferret-badger’s tail can be 46–51 cm (18–20 in) long, depending on age. They have black faces with distinctive white markings, grey bodies with a light-coloured stripe from head to tail, and dark legs with light-coloured underbellies. They grow to around 90 cm (35 in) in length including tail.

The European badger is one of the largest; the American badger, the hog badger, and the honey badger are generally a little smaller and lighter. Stink badgers are smaller still, and ferret-badgers smallest of all. They weigh around 9–11 kg (20–24 lb), while some Eurasian badgers weigh around 18 kg (40 lb). 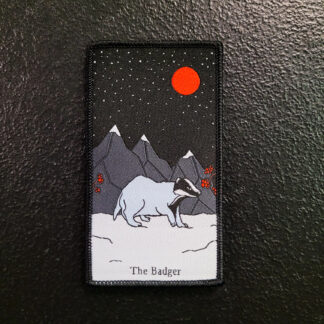