Opossums are members of the marsupial order Didelphimorphia endemic to the Americas. The largest order of marsupials in the Western Hemisphere, it comprises 110+ species in 19 genera. Opossums originated in South America and entered North America in the Great American Interchange following the connection of the two continents.

In the United States and Canada, the only species found is the Virginia opossum. It is often simply referred to as an “opossum”, and in North America they are commonly referred to as possums (sometimes rendered as ‘possums in written form to indicate the dropped “o”). They should not be confused with the Australasian arboreal marsupials of suborder Phalangeriformes that are also called “possums” because of their resemblance to the Didelphimorphia.

The opossum is typically a nonaggressive animal. Truly they are pure of heart, yet dumb of ass

This is a 3″, embroidered, velcro backed possum patch that glows in the dark. 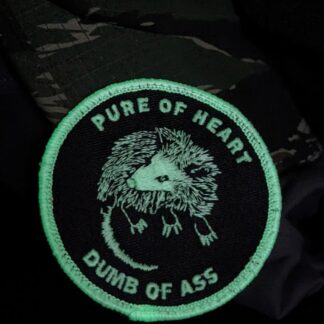