Commemorates the heroic efforts of truly elite OPERATORs! This patch is 5″ tall and velcro backed.

The Sirius Dog Sled Patrol (Danish: Slædepatruljen Sirius), known informally as Siriuspatruljen (the Sirius Patrol) and formerly known as North-East Greenland Sledge Patrol and Resolute Dog Sled Patrol, is an elite Danish naval unit. It conducts long-range reconnaissance patrolling, and enforces Danish sovereignty in the Arctic wilderness of northern and eastern Greenland, an area that includes the largest national park in the world. Patrolling is usually done in pairs, sometimes for four months and often without additional human contact.

The Sirius Patrol has the ability to engage militarily, and has done so historically. Its purpose is to maintain Danish sovereignty and police its area of responsibility. The physical and psychological demands for acceptance into the unit are exceptional.

Because of the special nature of Sirius Sled Patrol operations, a wide range of unique equipment is required that is not normally used by the Danish armed forces.

The weapons carried also reflect the harsh conditions. Among the equipment used by the Sirius Sledge Patrol is the M1917 Enfield bolt-action rifle chambered in .30-06 Springfield, known in Danish service as the Gevær M/53, and the Glock 20 pistol chambered in 10mm Auto.

The patrol formerly used Pistol M/49 sidearms chambered in 9×19mm Parabellum, but they proved insufficient against the polar bears encountered. 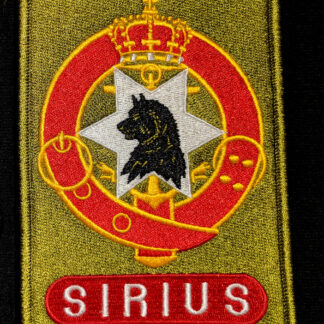